Matt Kelly, a master of all trades when considering the myriad elements of music. He’s a Music Mentor, Vocalist, Pianist, Minister of Music and Teacher, who’s sustained in the industry for 25 years. The native of Fayetteville, NC, has over 35 Commercial Music Credits. Remarkably, Matt has 3 RIAA Gold Recordings. He’s served as adviser, and he’s toured with International Gospel Recording Artist, John P. Kee, and that’s what led him to Charlotte, NC, making this great city his home.

“I knew that commercially, there would need to be a means to express who I am, and I knew that music was going to be that vehicle,” says Matt when asked about his reasoning for performing and recording Christian music.

“Over the years, I’ve had thirty commercial projects, performing, producing, and writing with various artist, independent artist, national artist, and regional artist. Sometimes, that was performing on various instruments as a songwriter or a producer,” Matt says.

Recently, the brilliant composer performed at Stage Door Theater [Blumenthal Perfoming Arts], for “The Reimaging of Stevie Wonder,” concert. “It was good. I had the chance to work with New Orleans arranger, composer, Grammy Award-winning, Matt Lemmler. Basically, he took the Stevie Wonder song book and arranged them for a ninenette, a nine piece big band, which is a smaller version of Jazz Orchestra. I featured on three or four songs. It was a wonderful opportunity and experience for Jazz Art Charlotte.” 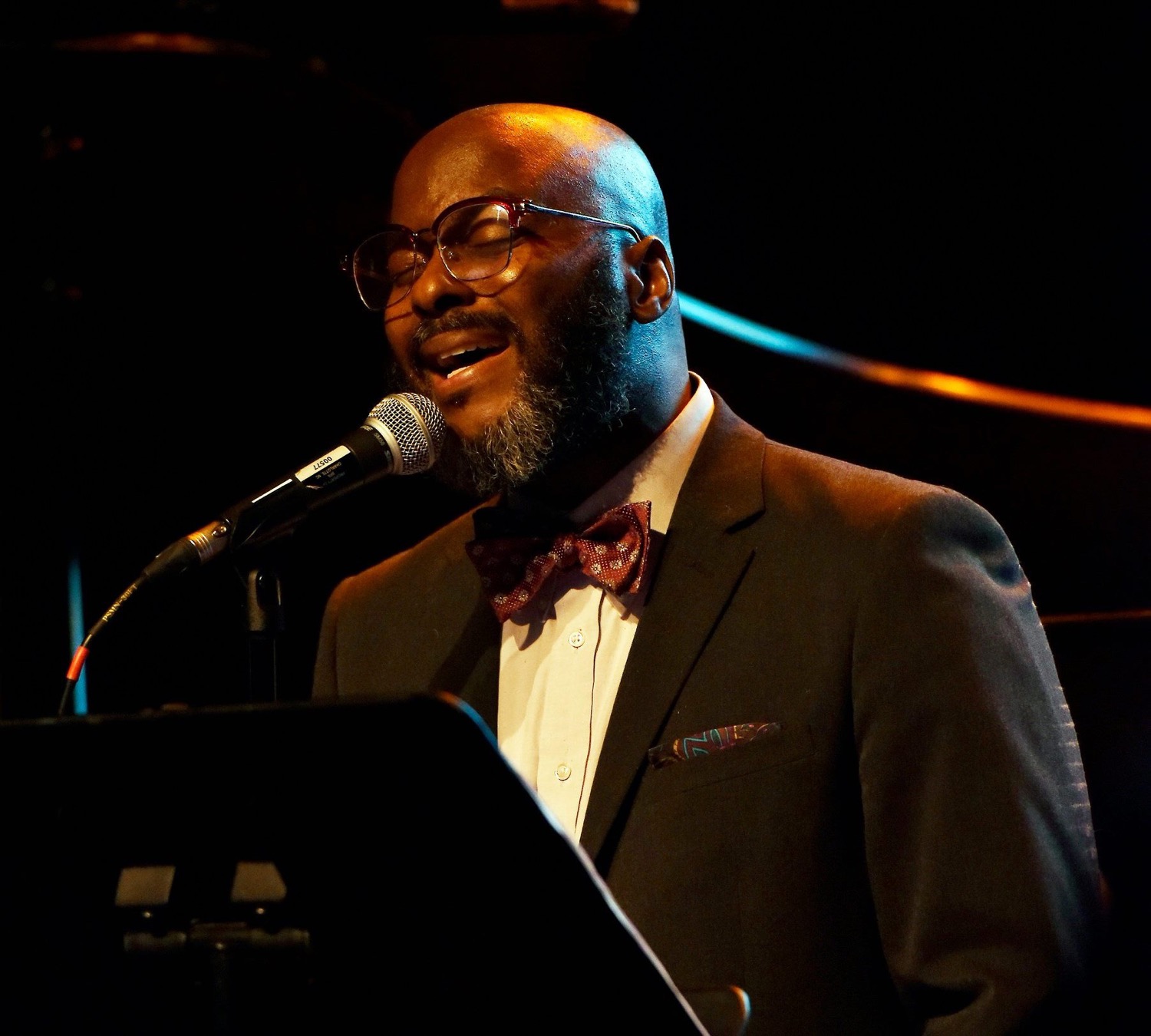 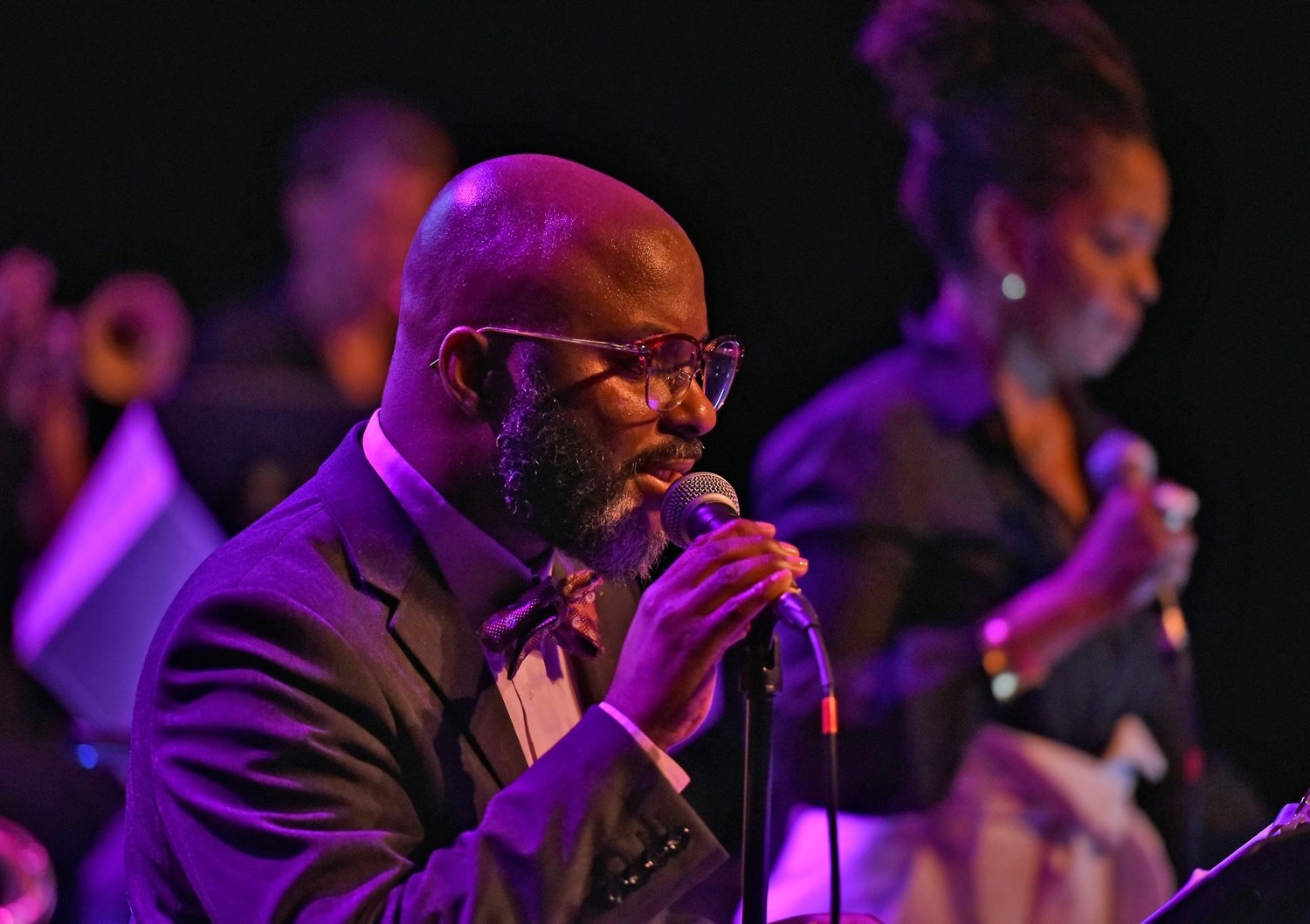 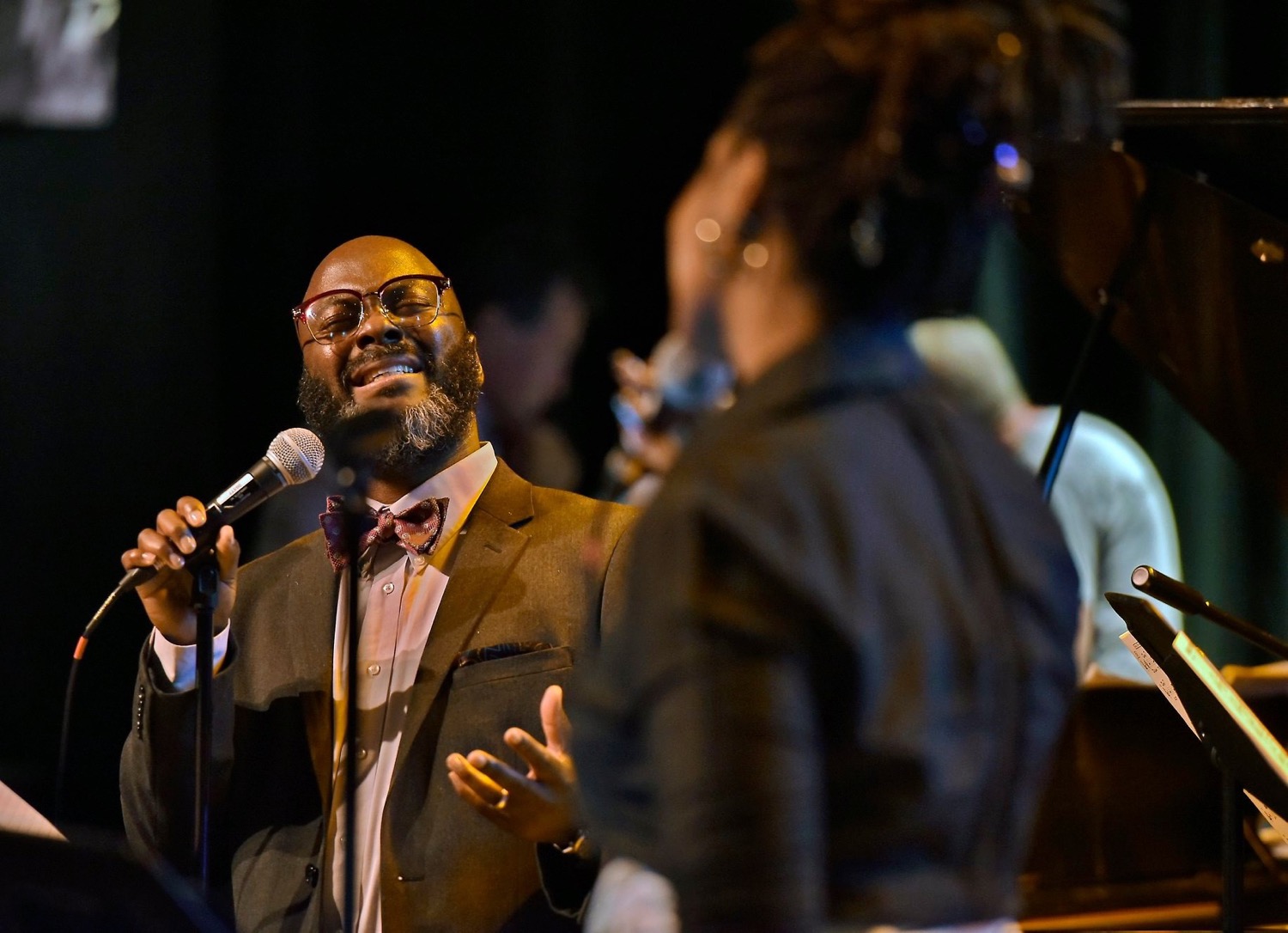 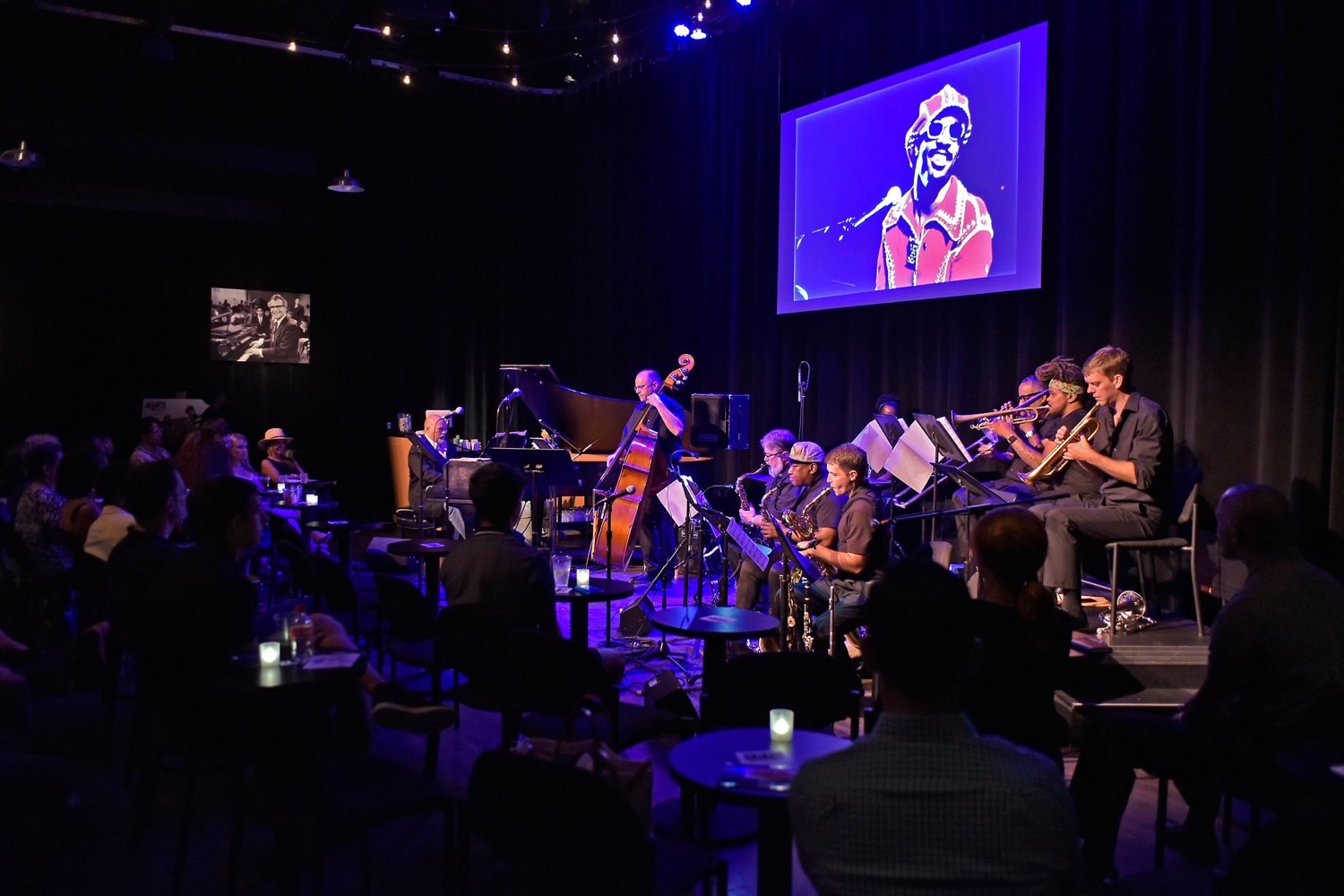 Matt considers the tender performance one of his favorites next to his feature with saxophonist, Adrian Crutchfield, who was part of the band for the late Prince Rogers Nelson.

Matt’s angelic voice takes you to dimensions of calmness and perspective. His compositions and performances, they binge between jazz, blues, soul, and gospel. Matt is a contemporary musician, and although he loves a good musical purée, he’s very thoughtful in his enthralling selections. He doesn’t perform or play offensive music. His medleys are uplifting and mollifying.

“I love all types of music, and the way it makes people feel for different seasons of their lives whether that’s jazz, R&B, country, and if it’s gospel, I’m down for the cause because music is the vehicle to touch people where words are sometimes blocked out singularly."

Matt initiated a platform called Music Success Academy, a web-based school for aspiring songsters and instrumentalist. He’s authored three amazing books called 365 Quips, Quotes, and Confessions for Creative Professionals, Music Success in your Market, and Foolproof Music Success: Why Talented Musicians Go Broke and Smart Musicians Get Paid and What You Can Do About It!”

“I feel that it’s important to present to personal and development content, that helps people understand that music can be a passion, but it is also a business. I want to marry people’s passion with profitable, sustainable, and predictable business models that work. We are developing our personal develop brand, which is music success academy.”

As if he doesn’t have enough on his plate to keep him busy, Matt is the Worship Pastor at East Stonewall AME Zion Church.

Matt’s zeal for teaching and empowering others to want more for them, to manifest greatness no matter what, it’s of mystical wonderment. He’s intently impassioned to help others. While most people do it for the money and notoriety, he does it simply because he can.

For starters, Matt says that just because you are a musician, that doesn’t mean you are a recording artist. “I think it’s very important for a musician or aspiring musicians to manage their expectations. Just because you have a gift and people enjoy what you do, it doesn’t mean that you’re going to be commercially successful. There’s a passion, and there’s a hobby. Some people, they are amateurs in their profession. The difference between the two is the way that they develop the business around what they are doing. Just because you can sing, that doesn’t mean you can run a business, especially in the music industry."

Matt takes that last paragraph a step further. He poses a question to applicants when he takes on a job, “Is your child the next Beyonce?” He asks that question because most people don’t understand the journey of what it takes to be successful or famous… “Beyonce is who she is because she’s done a lot of work behind the scenes that people will never know. We just see the result. It’s important for anyone, and especially parents with children, or the adults who have grander dreams in entertainment success to manage their expectations. It’s not going to happen overnight.”

According to Matt, it takes about 10 years to become an overnight success. Although that’s a critical fact, people need to define what success looks like to them… “Then, [once that’s done] we work backwards to marry expectations with actual practical ways and systems that are tried in the business world, to help build up predictable and sustainable models.”

‘I’ve had failures and I’ve had frustrations. There is no one [person] immune to bumps in the road. At the beginning, everybody sucks,” Matt explained that he’s relatable because he’s faced challenges in his own journey, which is the reason he’s adamant in helping others.

“Earlier on, I thought that just because I was talented, I was going to be successful. I had to be broke, I had to be homeless, I had to sleep in my car, and I had to be without. I’ve been in situations where earlier, the business of managing my career, and then managing my personal finances, that was something that I had to take care of. It’s a journey because once I made the transition from musician or hobbyist, to executive professional, there’s a different set of economies, there’s a different set of responsibility that you have to look more closely as you build, and make sure that you put systems in place so you don’t repeat steps that you’ve already made.”

Matt stresses that you won’t make a living by doing what you love on a consistent basis unless you’re making U.S. currency; otherwise, you’re still a hobbyist. He said that people shouldn’t get discouraged with that grave fact… “Start where you are and build, but take your time. The expectations are that we will be famous overnight. Nothing happens overnight. Take your time and put a team in place. Get people around you that can support you where you are and can build. Put things into place and don’t try to look like something you’re not if you’re just starting out.”

His formula for success:

M.U.S.I.C. M. MANAGE YOUR EXPECTATIONS. Just because you’re a talented musician doesn’t mean you’re meant to be a recording artist, although there are several options for you. Writers, Producers, Managers, Lawyers and Background Vocalist make a lot of money as well.

U. UNDERSTAND THE REAL MUSIC INDUSTRY. Learn how the REAL music industry works. Although, social media has leveled the playing field, the music industry still depends on knowing the right people and understanding how the industry works. The music business is ruthless, a bad decision can impact you for years.

S. STUDY THE BUSINESS. Research the different aspects of the music business so you can carve out a viable career path for yourself. The more you know the more options you can create.

I. INVEST IN YOUR CRAFT. Being self-taught and having natural talent is great but professional training to go along with your gifts can provide you with more options as a musician. Adding technical training to your resume can open up more doors for your career.

C. CREATE OPPORTUNITIES FOR YOURSELF. With the power of social media, you can use various platforms to showcase your talent and build a business.